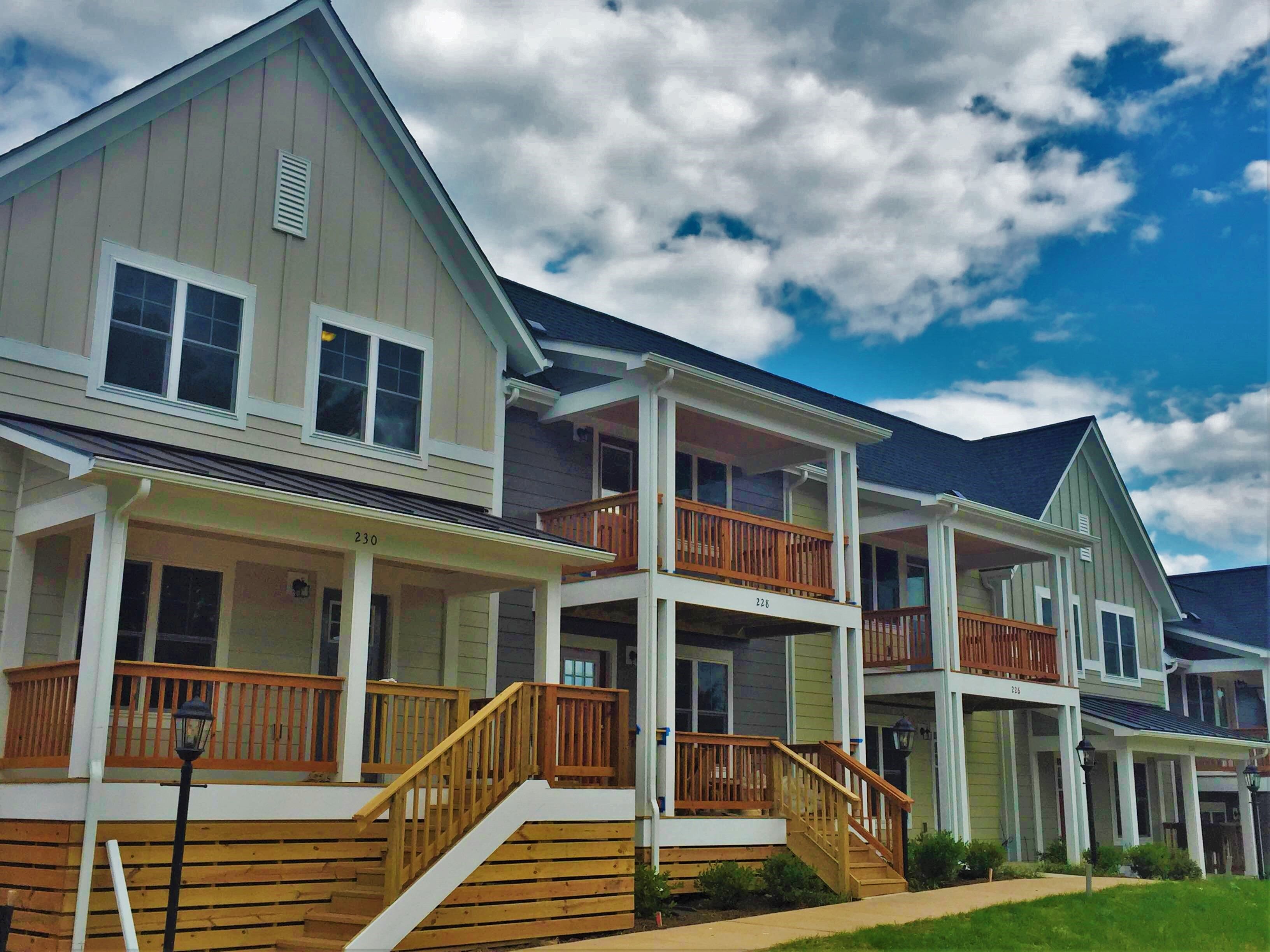 These two homes serve as the culmination of almost 15 years of dreams and collaborative planning with Southwood residents, Habitat staff and advisors, and Albemarle County. One will serve as a model home for Southwood residents, providing an example of the Habitat homes to come. The second home will be purchased by one of the forty Southwood families who designed the first village.

Construction of these beautiful homes began in late 2020. Located in the Lochlyn Hill subdivision in Charlottesville, the homes are a quick drive away from Pen Park, McIntire Park, and Downtown Charlottesville. These homes join the eight other Habitat units at Lochlyn Hill that Habitat completed in 2019.

Construction of this beautiful, secluded single family home began in late 2020. Located in Albemarle County just west of the City of Charlottesville, this home is a short drive from the Fontaine Research Park, the Ragged Mountain Natural Area, and the UVA Hospital. The home has three bedrooms, one full bathroom, a lovely back deck, and an unfinished basement.

Construction of this lovely duplex began in November 2020. Located in the 10th & Page neighborhood of Charlottesville, the homes are within walking distance of Booker T. Washington Park and Venable Elementary School. Both units have three bedrooms and two full bathrooms. The first floor of each unit also has a flex room.

This lovely duplex, completed in July 2021, is located in the Fry's Spring neighborhood of Charlottesville. Azalea Park, the Fry's Spring Beach Club, and Highway 29 are all a quick drive away. Both units have three bedrooms and two full bathrooms. The first floor of each unit also has a flex room that can be used as a bedroom.

This delightful 1 story renovated home is located in the Esmont community in Albemarle County. The home features 4 bedrooms and 1 bathroom. Construction was completed in August 2021.

We completed four homes on Nassau Street in the Belmont Neighborhood of Charlottesville in April 2021. This project is mix of 3 and 4 bedroom homes.

This inviting 2 story remodeled home on a finished basement has 3 finished bedrooms and 2 full bathrooms. Renovation of this home was completed in March of 2021.

This beautifully remodeled home has 3 bedrooms, 1 full bathroom, and 1 half bathroom. Renovation of this home was completed in February of 2021.

Harmony Ridge is a mixed-income development with 5 duplexes: four 2-bedroom homes, four 3-bedroom homes and two 4 bedroom homes. The remaining lots will be sold to private builders to complete the 14 unit project. These homes were completed late 2020.

The 6th Street home was purchased as part of the Neighborhood Revitalization Program. Renovations began in July 2019 and the family moved in December 2019.

In the January of 2018, we began building eight units in the new Lochlyn Hill development.  Working with Milestone Partners LLC., we built a six-plex and duplex providing spacious three and four bedroom homes. Families moved in summer of 2019.

This home is a three bedroom, one and a half bathroom townhome in the Townwood subdivision located in the Albemarle County urban ring. It is roughly a 1300 square foot home built in 1984 and was purchased as part of the Neighborhood Stabilization Program.

The home on 10th Street was purchased as part of the Neighborhood Revitalization program and renovation was completed in fall 2018. The original main home was build in 1901; there were two additions and a number of upgrades made before we bought it.

The Charlton Avenue project consists of two single family detached homes in the Rose Hill Neighborhood.   Both are three bedroom homes designed for single floor living.  These homes are just down the street from Washington Park, and construction was completed in Spring 2018.

In 2017, Habitat completed construction of a single family detached home on an infill lot in the Locust Grove neighborhood, an upper middle income Census tract in the City of Charlottesville.  The neighborhood is on a bus line and within walking distance to a neighborhood park, elementary school, the Rivanna Trail and the Downtown Mall.

Habitat has completed 6 Habitat homes to date on infill lots along Cleveland Avenue, infusing homeownership opportunities into a predominately renter occupied neighborhood. Tucked away off of busy Fifth Street, homes along Cleveland Avenue feature large backyards, plenty of greenspace, and low traffic. Habitat plans to build one additional duplex in 2018-2019.

Burnet Commons is a centrally located mixed-income neighborhood completed in partnership with Southern Development on a former City landfill site. The neighborhood features 25 Habitat homes, the last of which was completed in 2016. The neighborhood is safe and walkable with access to city transit, parks, and nearby amenities like the IX Art Park and the Downtown Mall.

Belmont Cottages is a 14 unit mixed-income neighborhood in Charlottesville’s popular Belmont neighborhood featuring 8 Habitat homes and 6 market rate homes built by Dickerson Homes and Development. Habitat completed construction of its last home in 2014.  The neighborhood is served by transit and is walkable to Fifth Street Station, Belmont Park, and the Downtown Mall.

At Sunrise Park, Habitat for Humanity of Greater Charlottesville successfully pioneered the concept of trailer park transformation without resident displacement. The resulting 70 unit mixed-income neighborhood features 32 Habitat homes in addition to market rate homes built by Southern Development. The last Habitat home was completed in 2014, and the final phase of market rate development is expected to be underway in 2018.  Neighborhood amenities include a neighborhood center with a commercial kitchen, yoga room and shared patio; two large common green spaces; and environmentally friendly features such as pervious paving and underground cisterns for capturing stormwater. Sunrise is situated next door to Big Brother Big Sisters and is within walking distance of downtown Belmont and the Rivanna River.